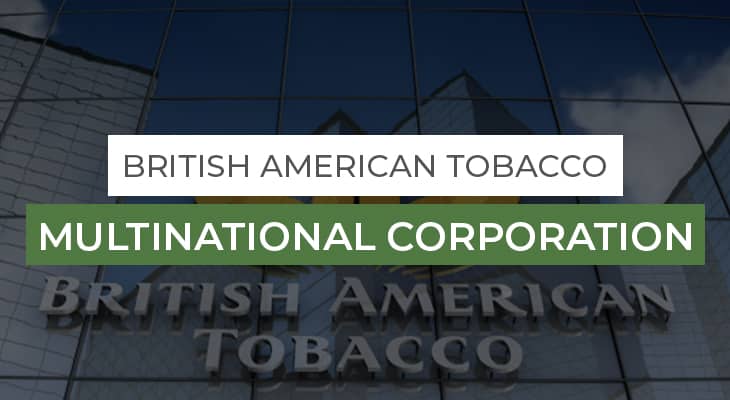 British American Tobacco plc (BAT) is a multinational corporation based in the United Kingdom that produces and sells cigarettes, tobacco, and other nicotine products. The business was founded in 1902 and is based in London, England.

By market share, BAT is the world’s second-largest publicly traded tobacco company (after Philip Morris International). The company produces over 5,300 billion cigarettes a year, which are distributed in over 200 markets in over 50 countries.

British American Tobacco is a holding company. The business is a multi-category consumer goods company that sells cigarettes and nicotine.

The segments of the company are the United States of America, the Americas and Sub-Saharan Africa, Europe and North Africa, and Asia-Pacific. Vogue, Viceroy, Kool, Peter Stuyvesant, Craven A, Benson & Hedges, John Player Gold Leaf, State Express 555, and Shuang Xi are among the company’s international and domestic cigarette brands.

BAT is a constituent of the FTSE 100 Index and has its primary listing on the London Stock Exchange. It is also listed on the Johannesburg Stock Exchange as a secondary stock. BAT plc ordinary shares are also traded as American Depositary Shares on the New York Stock Exchange.

BAT entered the insurance business in the late 1980s, purchasing Eagle Star, Allied Dunbar, and Farmer’s Group in the United Kingdom. BAT Industries, on the other hand, divested its non-tobacco industry in the late 1990s.

BAT announced in 2020 that it has signed on as a signatory to Business for Nature’s Call to Action, a global alliance uniting influential organizations and forward-thinking companies to amplify demands for concerted action to reverse nature loss this decade.

According to Euromonitor International, BAT owned approximately 12.7 percent of the overall global cigarette market in 2019 (by retail volume, including China). It posted overall sales of approximately UK £12.3 billion (US$16.5 billion) in June 2020, with tobacco and other combustible goods accounting for 90% of its earnings.

Nicoventures is a British American Tobacco (BAT) company established in 2010 that focuses solely on the production and commercialization of regulatory-approved, non-tobacco nicotine products.

Nicoventures was merged with BAT Research & Development and CN Creative in August 2013. The merger occurred concurrently with the online launch of BAT’s first e-cigarette, Vype. BAT began retail distribution in September and rechargeable Vypes in October 2013.

It is headquartered in Sweden and is the country’s second-largest snus manufacturer, producing approximately 22 million tins of snus per year from its Malmo factory. It employs approximately 90 employees. In 2008, it was acquired by BAT.

Granit, Mocca, Lucky Strike, and Knekt are some of its brands.

OrganiGram Holdings, Inc. manufactures and sells medical marijuana. Its primary goal is to produce cannabis for medical use as well as adult recreational use. Adult Recreational and Medical are two of the company’s brands. The company was founded on July 5, 2010, and is based in Moncton, Canada.

Despite BAT’s claim that it is “committed to youth smoking prevention,” the organization has been accused of targeting youth in its marketing efforts.

BAT’s launch of women’s cigarettes in 2011 coincided with the company’s announcement that it was providing scholarships for four Afghan girls at Durham University.

To be more specific, the organization is dealing with the issue of increasing smoking restrictions in developing countries.

In such a situation, emerging markets and developing countries are the major hope of British American Tobacco and other companies operating in the tobacco industry.

These markets are the major target markets for British American Tobacco because they can provide a considerable growth of the company business, while regulations and legislation in those countries are less strict compared to other countries.

JSE authorized BAT for listing in 2008. The JSE Limited (‘JSE’) granted a secondary listing by introducing all of British American Tobacco ordinary shares in the tobacco sector of the JSE’s main board under the abbreviated name BATS and the trading code BTI.

Following the acquisition of Reynolds American, British American Tobacco is neck and neck with Philip Morris International for the title of largest listed global tobacco firm, marginally larger on net sales than PMI but slightly smaller on volumes.

British American Tobacco Plc (BTI) currently has a share price of ZAR 553.03. The BTI stock closed its last trading day on the Johannesburg Stock Exchange at 553.03 ZAR per share, representing a 0.13 percent increase over its previous closing price of 552.33 ZAR.

BTI started the year with a share price of 545.45 ZAR and has since gained 1.39 percent on that price, ranking it 295th on the JSE in terms of year-to-date results.

The current trend is moderately bullish, and BTI is experiencing slight selling pressure.