Hammer forex is one of the first candlestick patterns that price action traders learn at the beginning of their careers. It is also known as the “bullish rejection candle” or “bullish pin bar.”

It is one of the most popular and important technical patterns in analysis. The Hammer candlestick pattern helps assist the price actions of the traders and, by following the bullish and bearish trends in the market, detects all the possible reversals.

This guide will talk about the hammer trading pattern and how you can trade with it.

What is a hammer forex pattern? 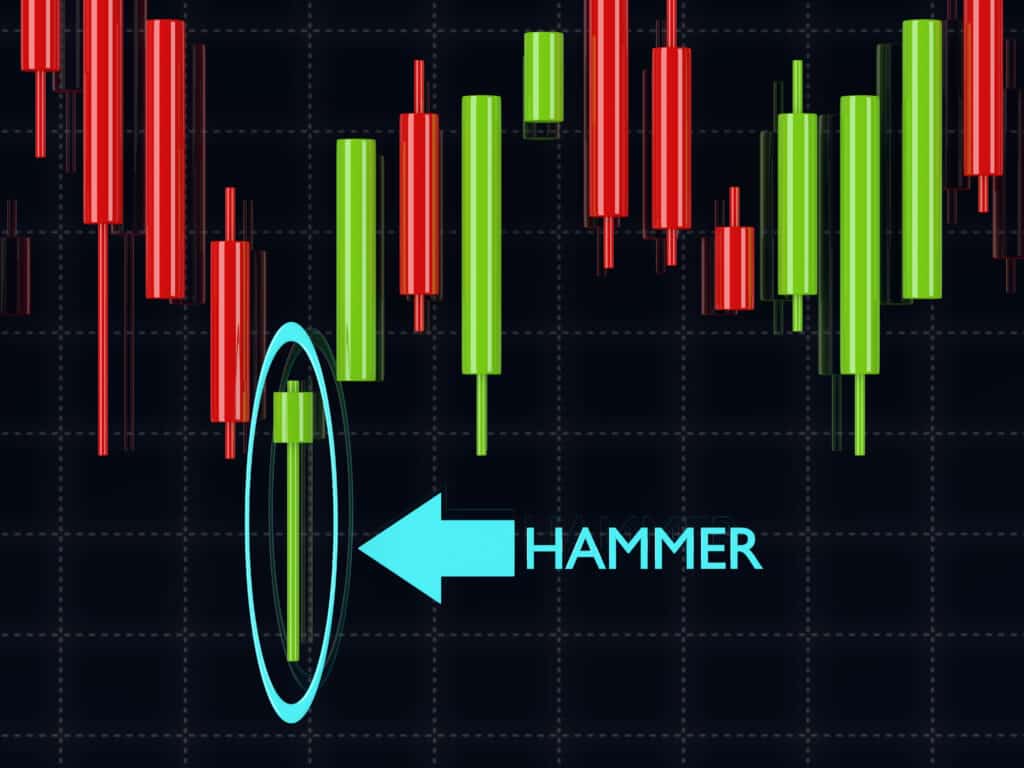 The Hammer candlestick pattern is a special candlestick charting pattern that occurs when the forex pair trend starts significantly lower than their opening. Still, rallies within the opening period to close near the original opening price.

It is considered a candlestick pattern that appears mostly at the bottom of downtrends.

The hammer pattern is a single-candle bullish reversal pattern that shows up often in all financial markets. It is mainly seen at the end of the corrective leg following the uptrend.

The prices are almost identical for the opening, high, or closing, and a long wick extends downward. It is twice as long as the short body.

The hammer pattern is formed when the open, high, and close prices are almost identical in the reading. There is also a long shadow on the lower side that is twice the length of the real body.

If the head of the hammer candlestick pattern is green, it is a strong formation compared to the red hammer pattern because the bulls completely rejected the bears. It symbolises that the bulls could push the stock price past the original opening price.

The lower long shadow of the hammer candlestick pattern shows that the market was tested to see where demand and support were at first.

At the lows of the day, when the market found the support area, the bulls started to push the prices higher and nearer to the original opening price.

How to identify the hammer pattern?

When the hammers are preceded by at least three or more falling or declining candles, they are most effective at that time. The declining candle is the one that closes lower than the close of the candle formed before it.

However, the hammer candlestick pattern does not indicate the average price reversal to the upside until confirmed.

When the hammer closes at the closing price of the hammer, it is confirmed that the pattern shown is the hammer candlestick pattern.

Traders often tend to liquidate the short ones or buy the long ones after or during the confirmation candle formation.

As a result, a stop-loss can be put below the low of the hammer’s shadow for individuals entering new long positions.

There are two types of hammer patterns: bullish and bearish.

The candle formed is exactly like a hangman’s inverted hammer shape. The candle is made of a small real body with no lower wick and an extended upper wick.

The hanging man pattern at the bullish swing’s top indicates that the prices have reached the overbought level, and then the sellers are around the corner.

However, this pattern is not completely a bearish signal. This pattern happens when the prices at the beginning of the day are higher than those at the end of the day. This makes a red candle. The wick on a bearish hammer shows that sellers are putting pressure on the market, leading to a drop.

The hanging man resembles a bearish hammer, but the main difference between the two is the place of their appearance.

The bearish hammer appears after a long price drop, and the price at the end of the pattern is still lower than it was initially. On the other hand, the bearish hammer delivers a weaker buy signal than the bullish hammer.

What is an inverted hammer?

What does the hammer candlestick pattern tell you?

As discussed above, the hammer candlestick is formed after the price falls, indicating that the price is attempting to form at the bottom.

When the bears have lost control of the market, a hammer can signify a possible change to an uptrend. But unfortunately, the candlestick usually shows up after three or more bearish candles because it adds more evidence.

The chart attached above shows a declined price chart followed by the hammer pattern. The pattern indicated had several times longer lower shadows than the real body.

The hammer suggests a signal of a possible price reversal to the upside.

The confirmation candle comes next, gaped at the higher position, and the price gets bid up to a close well above the price reversal to the upside.

A candle occurs during the confirmation time when the trader typically steps in to buy. A stop-loss condition is placed below the hammer or at the potentially lower half of the hammer’s original body.

Thomas Bulkowski’s “Encyclopaedia of Candlestick Charts” identifies that the longer, the lower shadow becomes, the more significant the pattern is.

Using all the data analysed and the detailed analysis of the historical market data, he studied around 20,000 different hammer pattern shapes.

In most cases, he devised that the shapes with the elongated shadows outperformed the other candle patterns with the shorter shadows.

The candle patterns vary between the bearish reversal after an uptrend and the bullish reversal at the end of a downtrend, depending on the timeframe.

When the hammer candlestick pattern is combined with the other indicators, it gives the traders a good entry point for the short and long positions.

The best approach is to identify the market trends and the combined hammer candlestick formations. It usually tends to form after a price decline.

Therefore, while making a trade, the defined price trend using the price actions uses the hammer candlestick pattern as an additional confirmation measure.

This hammer candlestick approach is highly profitable and straightforward if the price is within the trend. But, first, we have to identify the overall market bullish trends collectively.

A downtrend is what forms the hammer, and we want to ensure the market has gone enough before the signal is taken.

Therefore, the general RSI indicator is a favourite indicator for using the mean wise reversion. Generally, the RSI shows a high reading; it is believed that the market is overbought, and when the low readings are shown, it is believed to be oversold.

What is the difference between the hammer and Doji candlestick pattern?

Dojis are another type of candlestick pattern, but it has a small real body. It signifies the decisional relationship because it consists of both the lower and the upper shadow.

Dojis sometimes signals a reversal in the price confirmation or the trend continuation, depending on the followed confirmation pattern.

This makes it different from the hammer candlestick pattern, which occurs after the price decline, signals a potential upside reversal, and has a long shadow of the lower part.

What difference between a hammer candlestick and a shooting star?

The shooting star candlestick rises after the original opening but closes at roughly the same level as the trading period. It signals the top of the price trend.

Trading with the hammer candlestick pattern

Here’s how you can trade with the hammer forex pattern:

The hammer candlesticks are often formed after a price decline.

When a downtrend is coming to a potential reversal, it is the time when the hammer candlestick can be identified. But for the confirmation, you have to wait before the candlestick pattern comes to an end.

The average description of the candlestick pattern does not have any significance regarding the colour, and it can be either red or green. The main importance is of the lower shadow and a small body.

Once formed and the hammer candlestick and when the signal is validated, you want to set up the stop loss from 1 to 2 pips below the candle’s lower wick.

The entry pips should be 1 or 2 higher above the average candlestick pattern. This gives the trader a confirmation that the market trend is going toward the profitable techniques.

Then you have to wait for the proper time for the market to hit the order we want to buy. Or you can wait for the slight pullback to close the hammer candlestick’s price.

The main step is to pre-define your profits, you have to enter the trade, but you want to target the next resistance or the next forex market structure for the trade.

Pros and Cons of a Hammer Candlestick 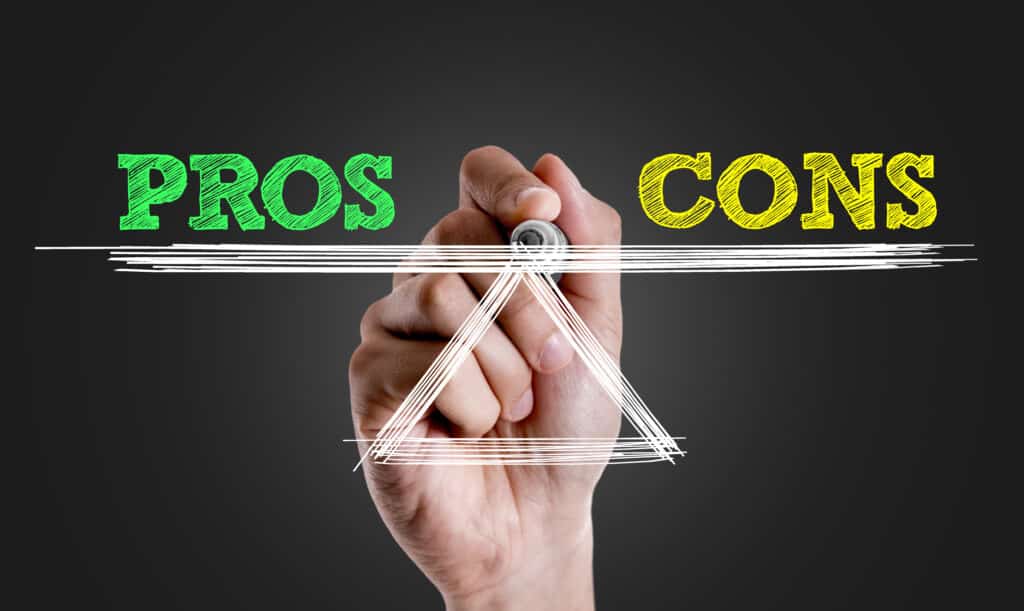 Every pattern of the candlestick has some positive outcomes and drawbacks. Unfortunately, there is no 100% guaranteed result when using any strategy in the financial market. The hammer is a candlestick pattern that needs other strategies to confirm its validity. Here are its pros and cons.

Although the hammer candlestick pattern is a useful tool that helps traders spot potential trend reversals, these patterns alone aren’t necessarily a buy or sell signal.

Similar to other trading strategies, hammer candles are more useful when combined with other analysis tools and technical indicators.

[top_three_brokers] Today, we will focus on the attributes of a classic forex trader. The road…