When the Evening Star appears, it is a warning that the uptrend is coming to an end and indicates it is time for traders to book profits. This article will explain how to trade the Evening Star pattern and understand its formation.

What is the evening star pattern? 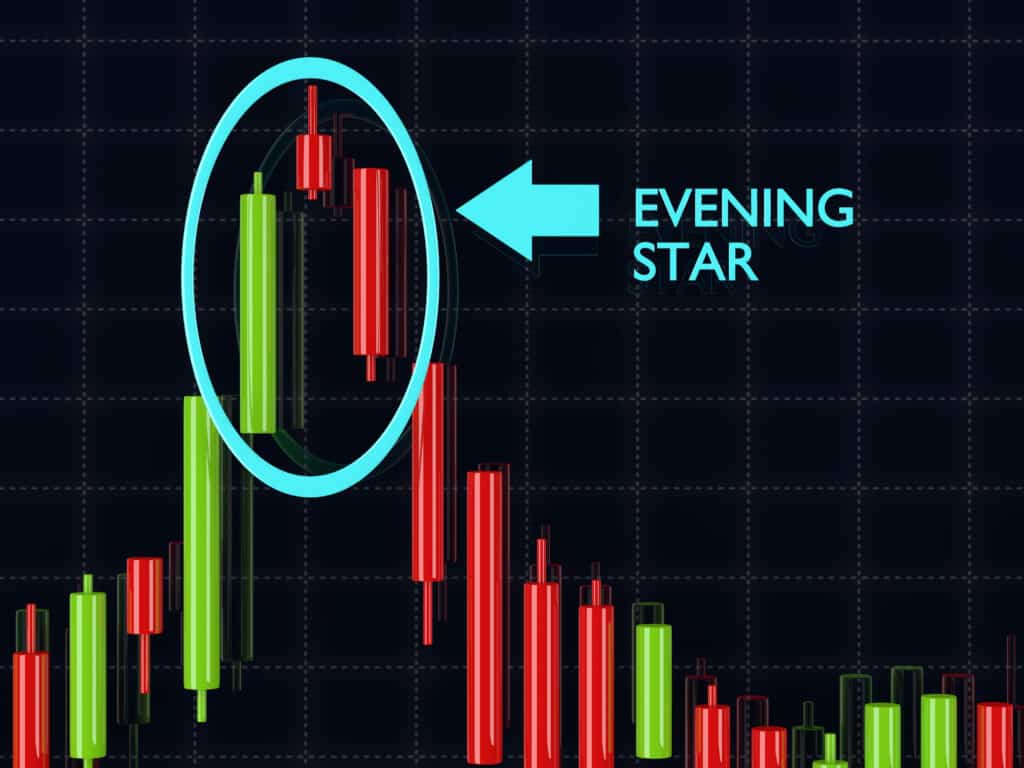 The Evening Star pattern occurs on asset price charts as a reversal pattern. The signal usually occurs at the top of an upward trend and is bearish. Evening Star patterns are uncommon among traders, but they are good indicators for technical analysis.

To analyse the morning and evening star patterns, you can use the historical price action and the Metatrader 5 trading platform, which you can access here.

How does an evening star work?

A candlestick pattern summarises certain information about a stock in a short period. Specifically, it represents the open, high, low, and close prices of a given stock over some time.

There are two wicks and a candle in every candlestick. A candle’s length is dependent on the price range between its highest and lowest point. Candles with a long length indicate significant price changes, while those with short lengths indicate small price changes.

Evening star patterns can serve as robust indicators of future stock price declines. For example, after three days, the pattern develops as follows:

It may be a reliable indicator of the beginning of a downward trend when it appears. However, there can be difficulty discerning it amidst the noise of stock-price data. The use of price oscillators and trendlines can help traders confirm whether an evening star pattern is present.

Rather than relying solely on one technical indicator to predict price movements, you should consult several indicators.

Even though it is popular with traders, the evening star pattern is not the only bearish indicator. In addition to the bearish harami and the dark cloud cover, you can see the bearish engulfing pattern and the shooting star. Traders are likely to watch for patterns unique to them to detect trend changes.

What does the evening star tell traders?

An Evening Star pattern is a bearish sign of a potential trend reversal at the top of an uptrend. Like the Morning Star, it consists of three candlesticks, with a star in the middle of the candlestick. An evening star must begin with a candlestick of light colour and a large natural body.

Additionally, stars can form inside the upper shadows of candlesticks. Stars are the first sign of weakness, as they indicate that the buyers could not move the price much higher than it closed during the previous period.

In the evening star, the reliability increases if the third candlestick opens below the actual body of the star, leaving a gap between them. Nonetheless, this is very rare. A third candlestick is more reliable if its natural body penetrates the actual body of the first candlestick and if its lower shadow is very limited or non-existent. Last but not least, you should also consider the volume since the pattern is more reliable if it is lower on the first candlestick and higher on the third.

How to identify an evening star on forex charts?

The Evening Star can be distinguished from three significant candles on a forex chart in more ways than one. To interpret the pattern, you need to know where the price action appears within the existing trend.

Establish an existing uptrend: The market should exhibit higher highs and higher lows.

Large bullish candle: Big buying pressure and an extension of the uptrend caused the big bullish candle. As of right now, traders should only seek out long trades since there is no evidence of a reversal.

Large bearish candle: This is the first real sign that new selling pressure is beginning. When it gaps down from its previous close, it signals the start of a new downtrend in non-forex markets.

Subsequent price action: After a successful price reversal, traders can expect lower highs and lower lows, but with well-placed stops, traders can minimise the risk of a failed move.

When the market shows signs of indecision, traders will tend to look for signs of easing buying pressure. Doji candles can appear at this point in the market.

Markets that open and close at the same level or very close can show with Doji candles. This indecision puts the market in a bearish position, as bears see value at this level and prevent further buying. A bearish confirmation appears by the appearance of the bearish candle after the Doji.

What about the morning star?

Morning Star is the bullish version of Evening Star and marks a potential turning point in a downtrend (bullish reversal pattern). The Morning Star can also be analysed using the same method as the Evening Star. However, it will reverse the process.

The Evening Star pattern can occur when an established trend leads to a reversal pattern.

Following the completion of the formation, traders can look for entry opportunities at the opening of the very next candle. Traders with a more conservative approach might delay their entry and wait to see if price action moves downward. This has the disadvantage that the trader will enter at a much lower level, especially in fast-moving markets.

It is possible to target previous levels of support or previously consolidated areas. A break of the recent swing high invalidates the reversal, so you should place stop orders above this level. Traders should maintain a positive risk-to-reward ratio to minimise exposure to forex market risks since there are no guarantees in this market.

How to trade & win Forex with an Evening Star candlestick pattern?

Notes: A bearish market is forecast by the Evening Star. You will only be able to sell at that time. It would be best if you didn’t place reverse orders (buy) with Evening Star.

Sell at the top

The price will usually plummet every time the Evening Star pattern occurs at the top. As such, you can place a sell order in this instance.

Open an order as follows:

Entry Point: Whenever the price reaches the end of the Evening Star candlestick pattern.

Stop-Loss: Before the price declines to the lowest level.

Take-Profit: When the price touches old resistance levels formed in the past.

How to trade & win Forex with the evening star?

A trader using this strategy must receive two signals to open an order. The first signal is when the price is declining. Secondly, it is the pattern of the Evening Star candlestick.

You can place an order as follows:

Entry Point: Whenever the price reaches the end of the Evening Star candlestick pattern.

Stop-Loss: At the next resistance level.

Take-Profit: When the price reaches an old support level.

Trade following the trend with the Evening star

Traders will wait for confirmation signals when the Evening Star appears before deciding whether to trade. So, with this indicator, your trading efficiency can be increased.

Take a look at the Evening Star pattern on a Demo account. It is one of the most reliable signals for Forex traders.

Morning Star patterns indicate a reversal from bearish to bullish, in contrast to the Evening Star patterns. The first candle of a morning star is a long bearish candle, indicating a downward price momentum. A “morning star” is a short-body (bearish or bullish) or Doji candle.

In addition to Evening Star and Morning Star patterns, there are also other types of stars. Each of the other Star patterns is a reversal pattern that can help traders decide on buying or selling. For example, despite the ongoing debate over whether technical analysis can serve as an investment tool, the Evening Star pattern is a reliable tool that can predict a bearish trend.

What are the pros and cons of evening star candlestick?

You can find both pros and cons in this candlestick pattern.

The Evening Star pattern appears in three candlesticks during an uptrend and is a bearish reversal candlestick pattern. As a result, it signifies a slowdown in upward momentum before a bearish move that lays the foundation for a new downtrend.

An Evening Star pattern is a technical analysis indicator that price momentum is reversing from upward to downward. Patterns of this type rarely appear, but they are considered reliable bearish indicators.

A candlestick pattern called an evening star appears at the end of an uptrend and signals that there will be a new uptrend.

There is often an Evening Star pattern in the charts and well-defined entry and exit levels. In addition, volume and other technical indicators, such as resistance levels, can confirm evening star patterns.

[top_three_brokers] In the last 15 years, the forex market has changed dramatically. Since the barriers…